Hull Liberal Democrats have published the results of their city-wide Crime Survey – based on over 1,000 responses from residents across Hull. You can download a copy of the survey by clicking here. 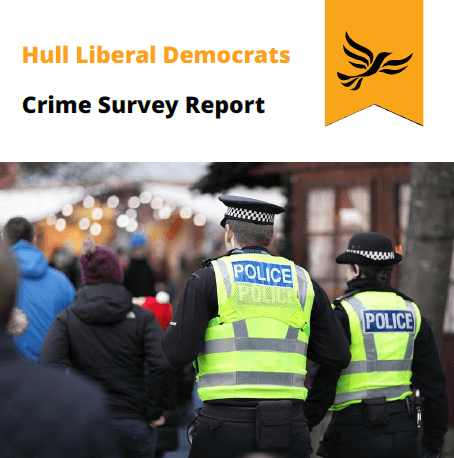 Last October, we launched the survey in response to growing concerns around crime and antisocial behaviour. The survey results will now be made available to the Humberside Police and Crime Commissioner and Chief Constable.

The Crime Survey has revealed:

We want to thank everyone who completed our Crime Survey. Your contribution has been invaluable in helping us to better understand the concerns that people have around crime and antisocial behaviour.

Looking at the results, two things have really stood out: the perception that crime and antisocial behaviour are getting worse and the impact of persistent – but lower level crime – on residents.

We hope that this report will help our local policing teams, who work so hard, even in the face of damaging government cuts.

Liberal Democrats in Hull are committed to listening to residents and working with partners across the city to help make Hull a safer place.